I purchased Aqua Vert in 2003 after being without a Cougar for over 15 years. I sold First Vert to buy textbooks for school and regretted it constantly. Every so often, I'd think about getting a Cougar just like my old one. My Midwestern austerity prevented me from ever seriously considering such a frivolous thing, especially while student loans needed to be paid, mortgage, and all the other mundane things of life. One Christmas visit to family, I think it was 2001, my brother brought up my old Cougar in conversation, saying what a sweet car it was and how smooth it rode at 100 mph. His comment refreshed my Cougar desire. It also ticked me off a little - I guess I was still jealously protecting my long-gone but fondly remembered car. Where does he get off driving my car that fast.

Come 2002, I had some money in the bank, student loans were finally paid off, no longer living paycheck to paycheck. Still, the idea of buying a Cougar seemed frivolous. It was at a SuperBowl party that a friend - who previously owned (and missed) a Chevelle, started talking cars. Responding to my vacillation about spending money on something so unnecessary, he remarked - "Life's short. Live it." He began taunting me by sending me his old Hemmings Motor News with post-it notes marking Cougars for sale.

The search was on. I searched through Hemmings, on-line newspaper classifieds, Collector Car Trader, eBay and other internet sites. But, it seemed like every time I found one, someone else had gotten to it first.

Finally, I found one listed on a web site that no longer exists. A retired couple from Winchester, Virginia was selling a few of their collector cars. The car sounded very similar to First Vert. I emailed the seller and impatiently waited for a reply. Contact was made, followed by a few more email exchanges and telephone calls, and they sent a few pictures:

The data plate and Owner's Manual document the following information:

Aqua Vert was in nice enough shape when I got it, but some things needed addressing. The heater core was bypassed, meaning I would face that Cougar rite of passage of replacing it. I put that off until fall - who needs a heater anyway - and attended to the more pressing issue of the brake booster which required rebuilding by Booster Dewey. The rim blow horn switch worked, but not consistently. Leon at FordRamAir provided the solution. Next on the list was the sagging rear suspension. I installed leaf springs from Espo. Rechromed bumpers were supplied by West Coast Classic Cougar.

The front suspension had the classic Ford squeak, but I procrastinated on rebuilding the front end, not wanting to take the car off the road or deal with frighteningly compressed coil springs. I lived with the incessant squeak for two years. I finally got around to doing it using coil springs from Espo and control arms, shocks, bushings, end links, etc. from Mustang's Plus. While I was at it, I also replaced the tie rods and idler arm to complete the front end rebuild, relying on parts from RockAuto. It's not a particularly fun job. Not particularly complex either - especially with the Classic Cougar Network instructions, which sadly have disappeared from the web. Best of all, it's done.

I sent the gas door to Ray Harwood to do his magic, and also got a clear clock lens that Ray produced to replace the typically clouded clock lenses. I rebuilt the carburetor, installed the Pertronix "pointless" ignition module with 12 volt power feed, as well as new cap, rotor, plugs and plug wires, new tires, and lots and lots of cleaning.

Buying and fixing up Aqua Vert failed to quench my Cougar thirst. I found myself thinking of restoring a Cougar from the ground up. Throwing Midwestern austerity aside, I eventually found Q Vert. The story of Q Vert continues on the following pages. The sad farewell to Aqua Vert is below.

As the rebuilding of Q Vert neared completion, owning two Cougars became a little more than I could handle with a two-car garage and daily drivers competing for space. Sadly, Aqua-vert went up for auction on eBay. 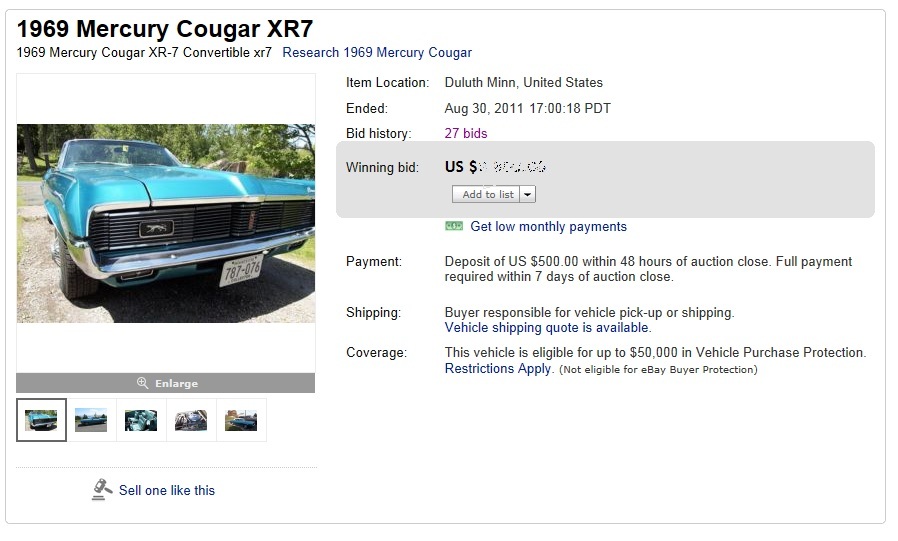 The new owner drove up to Duluth, MN from Baton Rouge, LA; and drove aqua vert back (over 2600 miles round trip in less than 4 days!). Not sure I would take a 40+ year old car, recently purchased from a stranger over the interweb, on a 1300 mile trip. Pretty good test drive, I guess.

It will be missed, but Q Vert will help ease its absence.... On to the story of Q Vert.